Sunshine (Kolmar’s Sunshine Girl) is our Show Girl. California breeder Mark Kolbe was gracious enough to entrust me with this wonderful girl! She already has 4 points towards her AKC Championship! Stay tuned for show news this winter!

Fozzie (GCH CH Happy Paws Havin Fun in Carneys Garden)  is our stud muffin! His coloring is Chocolate Parti (with white markings). He is absolutely crazy about his squeaky toys and often loves them a bit too much! He came from the wonderful Midwest breeder Shannon Clouse who owns Happy Paws Havanese.

In the show ring Fozzie was a star! He received his AKC Championship at under 9 months of age and his GRAND Championship less than 8 months later!

More importantly, he has passed all his health testing. Fozzie’s OFA (Orthopedic Foundation for Animals) results.

Also,I am what AKC calls a “genetic diversity breeding enthusiast.” That means I value the importance of breeding dogs with a more diverse gene pool which, studies show, leads to puppies with a greater resistance to genetic diseases, most importantly auto immune diseases. This is an extra health test not required but the Havanese Club of America, but one I believe is important.

Luna (CH Carneys Luminescent Moonflower) was born during the Red Wolf Moon in January 2019. She is a very sweet girl that enjoyed the show ring but enjoyed being a dog more! She quickly got her AKC Championship then retired to do what she loves best…play!! Her color is red sable parti. She is a total lap dog but loves her walks as well. 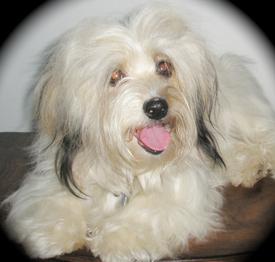 Phoebe was my very first Havanese. After 35 years I sold my flower shop and six months later brought her home from Great Falls Montana. Her “professional” name is Roughriders Winnett. She was bred by Kitty Braund who wrote one of the best books about Havanese as well as gained great notoriety for breeding, showing and raising healthy, happy Havanese. Now a sharp 90+ years old, Kitty has been my mentor.

I wouldn’t be where I am today without her kindness and support.Born July 30, 2007, Phoebe loved to clown around and play with her squeaky toys.

Sadly Phoebe crossed the Rainbow Bridge December 6, 2022. I can’t believe she is gone. 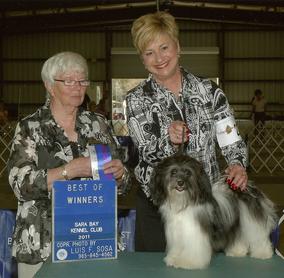 Maxi (Carneys Maximum Return) is a blackparti out of our Phoebe (Roughriders Winnett) and Prince (Los Perritos Heir Apparent).

She has a very sweet disposition and gets along with all our other dogs including our English Shepherd, Meora, who does not get along with too many dogs or people! 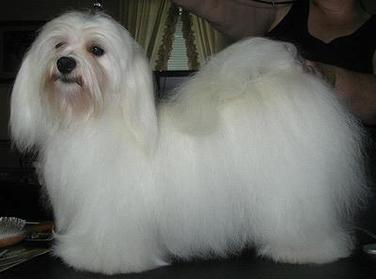 This is Lily, CH Amblers at Carneys Garden Party. She was bred by Kathy Ambler and is one of five champions from the same litter! Three are even grand champions! Lily is our diva. She loves to snuggle but she also carries an air of confidence and grace!

We plan to breed Lily one more time before she retires. She’s produced three champions….hoping for a fourth. 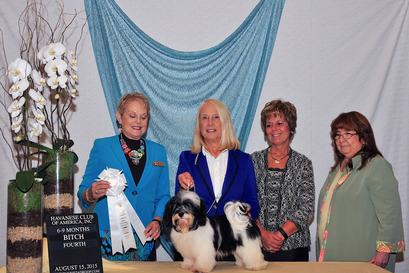 (Artwryks at Carneys Paradise Garden) is co-owned by myself and Vicki Brunn who is second from the left in the photo. Maggie kicked butt in the show ring as a puppy before she was even six months old. She even took fourth place in her class over about 18 other puppies at the National Havanese Specialty in 2015.

We expected her to continue her awesome successes and she did! Maggie became a champion in Kalamazoo Michigan in May, 2016 and a Grand Champion just four months later!

Maggie is about 11 pounds, as sweet as honey and not at all assuming!

Sawyer as a pup, owned by Kathy Ambler and myself.

Coming up in the ranks are Sawyer and Fern. These two are litter mates out of Lily and Wynmarks General Bradley at LP (Bradley). Sawyer (Carney Amblers Take Me To The River) is on the left and is co owned by Kathy Ambler and myself. Fern is on the right. Born April 2, 2015, Kathy and I have high hopes for these two cuties.

Sawyer has taken off in the show ring taking an “Award of Merit” at the Havanese National Specialty in August, 2016.

Fern became an AKC Champion in July, 2017! Now she is the proud mama of 4 beautiful puppies!!

Sienna is our up and coming show hopeful. She is out of Fozzie and Luna and was born mid October 2022.